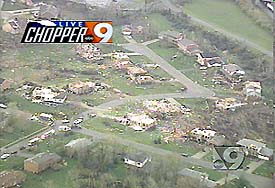 First of all, thanks to everyone that helped out on the net early this morning after we were all so rudely awakened. As you know, there were many reports of damage and tornadoes. We now know that there was a confirmed tornado touchdown. Double and triple thanks go out to Bob Kaegi KB8TPC, and Steve Lewis N8TFD for assuming net control duties during for this event and keeping some semblance of order on the net.

We were activated around 4:00am, when the first of the severe weather entered our area of responsibility from the west. Four people were killed as the result of this storm. This is, no doubt in part, because of the early hour the storm struck. Official determination by the NWS classifies this as an F-4 tornado, confirming what some of the TV meteorologists were estimating earlier today. A tornado warning was out for Hamilton County for quite some time before the storms wreaked havoc on the east side of the county. Without the diligence of spotters and the hard work of the Wilmington Office of the National Weather Service, the toll could have been much worse.

To the best of my knowledge, the first warning for Ripley County was issued on radar information. Shortly thereafter, we received reports via amateur radio that a tornado had touched down in southern Ripley County. The warning was then amended to include this observation.

About the time the major storm hit near Blue Ash, we received multiple reports of MEASURED winds above 55 MPH. We did not receive any reports of tornado sightings in the Blue Ash area. This is not unexpected. First, power loss prevents the use of many radios. Secondly, spotters were diving for cover, which is exactly what they should be doing. Remember: In situations like this, YOUR SAFETY COMES FIRST.

Then, we started getting reports of heavy damage near Blue Ash. Bruce Goldstein, KC8IYS, normally an early riser, was in the area. (NOTE: We do not advocate leaving the safety of a building to go out searching for storms. Bruce was unfortunate enough to be there anyway.) Large sections of chain link fence were blown down. Think about it, with minimal surface area, it takes a very strong wind or a lot of blowing debris to take out large sections of chain link fence. Then we heard reports of overturned cars and trucks. Massive power outages took out all traffic control lights and made seeing anything difficult. Downed power lines made it even more hazardous. Then the reports of structural damage continued flowing in from hams and public safety officials, revealing that this was a genuine disaster.

Throughout the net, it seemed wind was the major problem. We received no reports of hail that is so common with violent tornadoes. We received a few reports of heavy rain, but it didn’t last long enough to cause any flooding. Even though we do not use it as a reporting criteria, it was interesting to find that lightning was not extremely frequent, no more than any average storm.

When the severe weather moved out of the area, the weather net was deactivated. Some of our people were almost immediately activated for other functions i.e.. Red Cross and EMA. But, that is another story. Suffice it to say, the ham radio operators have been finding much to do during this tragic event.

Again thanks for all the help. But, like all things, there is usually room for improvement. This was the first serious activation of 1999. Some of the reports were excellent, but others were far from meeting any of our criteria. From listening to the net, I think a refresher in the reporting criteria is in order. Please adhere to these criteria STRICTLY, unless instructed otherwise by net control.

1. Winds of 50 MPH or greater, measured. If you must estimate, we need reports of damaged buildings or damage to healthy substantial trees and the like. It is very difficult to estimate wind speeds accurately, so if you can’t measure it, only report damage, not guestimated speed.

2. Rain 1″ per hour or greater, measured. Again, it is hard to quantify rain without a gauge.

3. Flooding. Any stream out of its banks or more than a foot of water in the street (where it doesn’t usually flood.)

6. Any significant structural damage or multiple trees down caused by weather.

All of the above are for things you observe first hand. We cannot accept reports of things heard from scanners, TV, or the Internet. The ONLY permissible relays are from other hams who cannot reach the repeater directly. Please do not report power outages, unless caused by the above criteria and you saw the cause first hand. We cannot do anything about them.

Also, please do not take up net time by asking for weather reports. We collect information and pass it on to NWS. Many times NOAA weather radio and/or local media have more information than we do. They use our reports and add a bunch more information that we don’t have. We don’t have time to listen to it the NOAA broadcast. We have only what has been reported directly to us. You can get that same information on the net just by listening.

Please do not report lightning, no matter how frequent. It is not used as a warning criteria by NWS. In short, all thunderstorms contain lightning, and are therefore dangerous. Precautions should be taken for lightning safety if ANY lightning is present.

We all tend to get excited during severe WX. We all have to work hard at maintaining proper discipline on the radio, but we must refrain from making reports that do not meet the above criteria.

Since it is so early in the year, we’re sure to have more activations. After we all get accustomed to severe weather again, hopefully we’ll see more order on the nets.

Thanks again for all the qualified reports. All in all, we had a really rough net for so early in the season. Given the circumstances, we’ll give the net a B-. Let’s make the next one an A+. Caution: The grading curve gets tougher later in the year.